Mr. Ortega serves as project manager and lead tunnel engineer for this project, which is one segment of the Northeast Transmission Water Line (NETL) under the SWTP. The SWTP consists of major improvements to the transmission system in the City to transition from primarily groundwater to surface water in order to comply with the Harris-Galveston Coastal Subsidence District’s (HGCSD) regulatory plan. NETL is a multiyear project which will provide treated water produced by the planned expansion of the City’s Northeast Water Purification Plant (NEWPP) to the George Bush International Airport along with the City in general.

This project primarily consists of construction of approximately 8,000 LF of 108” diameter water line by a combination of open cut and tunneling from west of John Ralston Road to east of Union Pacific Railroad crossing Water Works Blvd, and replacement of public storm sewer and roadway pavement in City, TxDOT, and Harris County Rights-of-Way.

Mr. Ortega was the Project Manager and lead technical engineer for the design approximately 6,500 LF of 108” water line, located primarily within water line easements. The alignment was located within developed and undeveloped properties, some of which were ongoing small businesses. The project includes eight tunnels totaling 2,325 LF, including a tunnel under a US 59 overpass at Aldine Bender (aka FM 525) between the abutment and bent piles. To complete this critical tunnel crossing with the 108” waterline, a specific geotechnical investigation plan was formulated by Mr. Ortega to identify the risks with the tunnel crossing and to avoid settlement-induced damage to the bridge. Alternatives to reducing the settlement risk included verifying the soil variations via continuous cone penetrometer testing, evaluation of chemical soil stabilization, and the use of EPTBM equipment to mitigate the risks.

Aurora was selected to design a project that is part of North Harris County Regional Water Authority’s (Authority) 2025 water supply system plan, a multi-year project which will carry water from the Northeast Water Purification Plant (NEWPP) to the Authority’s new SH 249 Regional Pump Station and Storage Facility. This project consisted of a meter station with disinfection and approximately 9,300 LF of 84-inch water transmission line along various easements and a high voltage transmission line CenterPoint Corridor. The major challenges to this project included a fault crossing, close proximity to many high-voltage transmission line towers, and tunneling under Beltway 8. During the initial design phase of this project, Aurora was tasked to evaluate meter station locations and potential routes. The final route reduced tunnel length under beltway 8 from 2,000LF to approximately 500 LF, reducing project risk and cost. The bid construction cost for this project is $34M, and the project was bid 4 months ahead of schedule.

A+ Services serves as project manager and the lead tunnel engineer on this project that consists of a proposed 66” water transmission line, redesign of an existing 12” water line and existing sidewalk located along West Hardy Road from south of Beltway 8 to south of Greens Road. A+ Services performs design services, including designing of approximately 5,700 LF of 66” water transmission line, interconnection to existing 66” water line, redesigning of approximately 5,000 LF of 12” water line and replacement of the limited existing sidewalk through the limits of the project. The project consists of three major crossings: Beltway 8, Greens Bayou and Greens Road crossings, where the water line will be designed in tunnel. Design tasks include coordination and obtaining permits/approvals from different Regulatory Agencies, coordination with adjacent projects, water line design (open-cut and tunnel), pavement design, sidewalk design, and developing construction drawings. A+ Services also assists the City of Houston - PWE with the bidding process, preparing clarifications and addenda as needed, making recommendation for award of construction contract, and providing conformed documents.

Mr. Ortega was the project manager for five miles of 84” gravity relief trunk sewer via tunnel construction to divert excess flows from the Almeda Sims service areas and provide needed relief to the North McGregor Pump Station (Medical Center/Rice University/Greenway Plaza) collection system. This project involved routing the project from the northern limits of Houston’s Central Business District, south to the Texas Medical Center. Although the entire project was tunneled, Mr. Ortega was required to address the technical challenges of placing the line between St. Joseph’s Medical Center buildings, dealing with foundation encroachment into the public rights-of-way, record research due to the number of basements and tie-back systems from the basements that extended into the street rights-of-way, and obtaining approval to cross the City’s Herman Park Golf Course. Mr. Ortega was responsible for siting the tunnel shafts, the tunnel and pipe design, and overall coordination with the hospitals. As the Lead Project Engineer, he was also responsible for the tunnel design for the portion of the project from Ruiz Pump Station to the Taft Street, and junction box design including the drop connection configuration to reduce the odor concerns, coordinating the geotechnical investigation throughout the Central Business District of downtown Houston, and acting as a liaison with the property owners including the St. Joseph Medical Center.

The Integrated Pipeline (IPL) Project is a joint effort by the Tarrant Regional Water District (TRWD) and Dallas Water Utilities (DWU) to increase water supply to the Dallas/Fort Worth metroplex. Mr. Ortega was one of the lead technical engineers for the design of Section 15-1, which consisted of 15 miles of 108” pipeline. This segment included 15 stream crossings, 15 highway/road crossings, and one railroad crossing. Seven of the crossings were designed utilizing tunneling methods. Mr. Ortega was the lead engineer for all the tunnel crossings. His role included identifying the risks with each crossing, evaluating the subsurface conditions identified by the geotechnical consultant, and determining the appropriate stratum to place the tunnels in order to mitigate the risks. These tunnel crossings required design coordination with TxDOT, Navarro County, and Union Pacific Railroad. The UPRR crossing was complicated by UPRR’s requirement to limit the settlement too less than ¼”. This required developing specific instrumentation requirements for the contractor while performing the tunneling operation along with an emergency action plan should the settlement exceed the allowable. The IH-45 crossing was at an angle greater than 45 degrees. Based on the justification presented to TxDOT, the crossing was approved providing an estimated cost savings (as compared to a traditional 90-degree crossing) of almost $1 million and eliminated some easements. 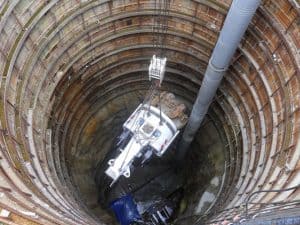 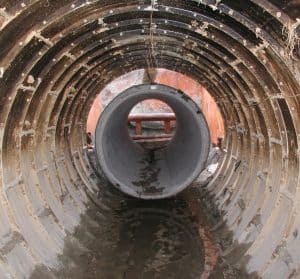