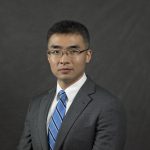 “We are excited to announce that Dr. Meng Liu has been published in ASCE Journal! We are very proud that he is part of the Aurora Team! Read and excerpt below.”

Abstract: Design and analysis of thrust restraint for a buried continuous pressure pipe is essentially a pipe–soil interaction (PSI) problem regardless of pipe materials and restraint methods. In practice, thrust block and restrained joints are the most commonly used restraint methods, and dual restraint systems using both methods can be found in many pipeline projects even though they are treated independently. However, no analytical procedure is available to analyze the performance of such dual restraint systems. Therefore, a closed-form linear-elastic solution considering PSI is proposed to analyze pipes restrained with both thrust blocks and restrained joints or continuous
pipes restrained with thrust blocks. The solution also considers the contribution of friction resistance due to increased normal pressure at the pipe–soil interface, as the pipe moves laterally into and longitudinally through soils simultaneously. The solution can be easily implemented by hand-calculation or a spreadsheet for various pipe material, geometry, and soil stiffness. The example provided demonstrates that the current guideline procedure overestimates the restraint length and underestimates the axial force slightly because the frictional resistance from
lateral pipe movement is neglected. A comprehensive parametric study has been conducted to illustrate the effects of different design parameters on the internal forces, displacements, and restraint length of pipes. It is found that soil stiffness is the most critical parameter in resisting thrust force.

Successful and cost-effective solutions for water and wastewater pipelines

When establishing Aurora Technical Services, the thought process was simple:
deliver solid, innovative engineering to provide solutions that work.
This approach is based on the principal engineer’s experience serving municipalities and agencies on some of the largest and most complicated water and wastewater systems in the U.S.